The Importance of Defensive Driving: Accident in Lakeland Has Community Reeling 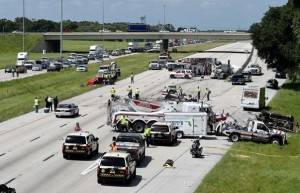 The Importance of Defensive Driving

Polk County, FL is a “commuter county.” Hundreds of people travel I-4 each day, heading to their jobs in either Orlando (east) or Tampa (west). Heavy traffic can be counted on, especially in the mornings, and late in the afternoons starting around 4:00 PM, and accidents are not uncommon.

Usually, the most you’ll deal with on I-4 is a “bump up,” from someone not stopping in time, or not paying attention when they change lanes. However, yesterday’s accident right outside of Lakeland on I-4 West is an example of how a “bump up” can turn into something much worse and how defensive driving could save your life.

Early in the morning of June 21, 2016, a truck was heading east on I-4. Whether he was driving at a high rate of speed, not paying attention, or driving recklessly we don’t know, but when the young man lost control and drifted into the lane beside him, he had a “bump up” with the front corner of another truck. Ordinarily, this minor incident might have been harmless, but this time, the impact caused him to lose control completely. His truck went completely through the median into oncoming westbound traffic, and by the time the dust settled, seven vehicles were involved in the crash, and four lives were lost within a few short minutes. What’s even worse? Two of the deaths were the result of a secondary crash caused by the first accident.

This sobering reality is something commuters face on a daily basis here in Polk County. It’s easy to fall into the false security offered by guardrails, or trust in other drivers, and let your guard down when you’re making your daily trek into the office. However, in yesterday’s collision the guardrails did nothing to stop a truck from plowing completely through them, and trust in “the other driver” was lost as vehicles piled up in short order.

Defensive driving is necessary as a commuter. While we are taught to “think the best of someone” when we are young, the same rules do not apply on the highway. When you are behind the wheel, taking on the mentality that everyone else is on the offense means you are more likely to be hyper-aware of surroundings and better prepared to handle yourself and your vehicle in the event of an accident.

While you might be employing defensive driving techniques on the roadways, the time may come when you need defense in the courtroom. Accidents happen, and they are often unexpected and can have a huge impact on your emotions, your finances, and even you physically. If you are in the need of legal representation and defense in a vehicle collision case, give us a call. Sessums Law Group serves the greater Lakeland area, and we specialize in vehicle accidents and making sure you receive the compensation you deserve.

Remember to drive safely, but when the unexpected happens, Sessums Law Group stands YOU!