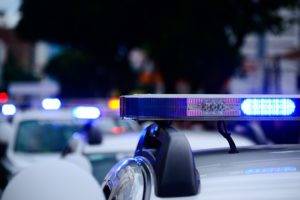 A quiet patrol of Posner Park in Davenport turned into a large-scale chase on Monday, September 5th, 2016 with what started as an easy evening run-through of the popular shopping center by Polk County sheriff’s deputies. However, they decided to investigate further when they saw a suspicious-looking truck suddenly turn around upon spotting them.

After running the plate number, they realized that the silver 2008 GMC pickup was a stolen vehicle, and they attempted a traffic stop in vain. The suspects headed south on US 27 trying to flee the authorities. Stop-stick deployment was approved, and they were placed in the path of the oncoming truck. After still refusing to stop, the truck continued south, running over the stop-sticks and shredding the front tires. A deputy was able to perform the P.I.T. maneuver that sent the pickup into the ditch on the east side of the highway. The suspects exited the truck and took off on foot, where they were apprehended using backup force by the K-9 unit. They were arrested and, since they were minors ages 15 and 17, they were taken to JAC in Bartow after their guardians were notified. In addition to the stolen truck, the keys for a second stolen vehicle were found in their possession, as well as stolen jewelry with the tags still on.

It’s unfortunate that these two young men decided to flee from the initial traffic stop, since their run added more charges than they were already facing from their actions. What’s worse is they put countless other drivers at risk with their run from police. This case made us ask, how should one handle this situation if they happen to be on the road when a police chase is going on in their immediate area?

First, a good rule of thumb is that if you see police lights (or any emergency vehicle lights) pull off to the side of the road if it’s safe to do so. In the case of fire trucks, or an ambulance, you pulling out of the way opens up the road for first responders to reach their destination more quickly, and that saves lives. For police though, pulling over protects you as well. Police chase scenarios often include high speed, and that can put you at risk if you don’t get out of the way. Secondly, you should NEVER attempt to get involved. You put yourself, the officers, and even the suspects, at a higher risk by doing so. The police are there to handle the chase, and you are better to stay as far away as possible. Finally, if you hear word that a chase (or something similar) is going on in your area but you don’t see the action, stay where you are, or turn around and go the other way. If you have the choice to stay far away from the action, DO IT!

If you have been involved in an accident or collision thanks to a police chase or similar circumstance, you could be eligible for compensation depending on the details of the case. We are highly trained in accident law, and we will give you the highest quality of representation and get the benefits you deserve. Remember, when the unexpected happens, WE STAND FOR YOU!