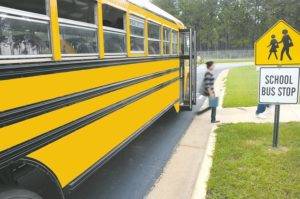 A Sarasota County School bus driver has been charged with careless driving after being cited as the at-fault driver in an accident on West Hillsborough Blvd. This case is a prime example of the importance of paying attention when you drive, whether you’re behind the wheel of a bus, or your own compact car.

The driver of the bus, Lloyd Bethune, was driving the bus and failed to stop when the driver in front of him slowed, and he rear-ended that vehicle, which then sent them into the rear of a third car. This “chain-reaction” type of accident is typical of rear-end collisions, and they can be catastrophic, especially if the driver of the initial impact vehicle is traveling at a high rate of speed. What typically causes these types of accidents…lack of attention while driving? More than not these accidents result from a driver using a cell phone or other device, talking to passengers in the vehicle, adjusting the radio, etc. In this specific case being handled by North Port police, we don’t know the exact cause of Bethune hitting the vehicles in front of him, but we do know that the injuries could have been much worse than they actually were. While the occupants of the two other vehicles did sustain minor injuries and were treated at local hospitals, there were (thankfully) no serious injuries or fatalities in this case, nor were any students injured in the accident.

We urge you to stay alert and focused whenever you’re behind the wheel of any vehicle, and if you feel that you won’t be able to pay attention while driving, take time to pull off and take a rest, get something to eat/drink, walk around, etc. Whatever it takes to refocus your mind and ward off sleepiness, restlessness, etc., do it, since it could end up saving your life and/or the lives of others on the road.

If you or someone you know has been injured in an accident resulting from a lack of attention or reckless driving, Sessums Law Group is here to help them navigate their case, and give them legal representation that will fit their specific needs. We handle everything from insurance claims to court hearings, because when the unexpected happens, WE STAND FOR YOU!